Welcome to the season of testing, our vernal blood sport. Uploading the schedule took forever. It must have been the server of the New York State Education Department, sclerotic as the bureaucracy itself. But there it was, a memo signed by Deputy Commissioner Angelica Infante-Green. An exam for every public school student on the “education” spectrum—if one could dignify it as such—from third through eighth grade. 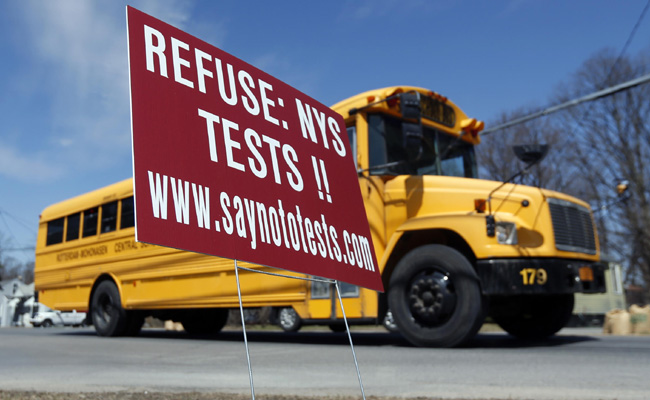 Action has intensified in recent weeks.  New York State Allies for Public Education, which has long guided parents in the process of refusal, expressed outrage at a toolkit sent to schools by Education Commissioner MaryEllen Elia.  It was misleading, the group argued, and omitted important facts. Two weeks before the first exam, Elia talked with the editorial board of the Albany Times Union. “The temperature is basically calming,” she told them, predicting a decline in the opt-out rates.

We’ve come a long way since 2012, when former U.S. Education Secretary Arne Duncan took “white suburban moms” to task for rebelling against the Common Core standards for math and language arts instruction.  “All of a sudden, their child isn’t as brilliant as they thought they were,” he said, his syntax oddly mangled. The parents were angry.

New York led the nation in test refusal in 2015, the year that Elia was hired as the new education commissioner by the state’s Board of Regents: more than 20 percent of eligible students opted out. Superintendent of schools in Florida’s Hillsborough County for a decade, she had just been fired, dismissed without cause, two and a half years left on her contract.  The constituents of her district—awarded $100 million from the Bill & Melinda Gates Foundation to develop a teacher evaluation system—had complained about the proliferation of high-stakes testing and the scarcity of services for students with special needs.

Despite Elia’s efforts to stymie the boycott, the number of refusals in New York exceeded 230,000 in 2016, an increase over the previous year. Opposition has been especially fierce in the suburbs of Long Island, the epicenter of the state’s opt-out movement.

But the face of the movement is changing. Duncan’s white soccer moms  have been joined by a more diverse community of parents and educators.  They’ve  surfaced issues for which the tests have become metaphor: social justice, educational equity, racial inequality, and culturally responsive classrooms.

On March 23, Maribel Padin, of Valley Stream, New York, posted a Spanish-language video with English subtitles to her Facebook page, voices overlapping in condemnation of the Common Core tests.  As one parent put it, “They don’t have that love they had in kindergarten when they would jump up and want to run to school.”

Karen Sprowal was moved to action after her young Black son, Matthew, a kindergartner at the time, was deemed disruptive and encouraged to leave Harlem Success Academy 3, part of a controversial network of charter schools in New York City run by Eva Moskowitz.  Fearing he would be “fired,” the five-year-old was throwing up most mornings.

This week, Sprowal posted to Facebook a video made in 2012, featuring Matthew, now a poised, articulate student at P.S 75, on Manhattan’s Upper West Side, and the only third grader to refuse the tests. She serves as narrator, giving a nod to fellow protesting parents and teachers in Westchester and on Long Island, and detailing the effects of the Common Core testing regime on children:

It literally has changed the culture of the school. Children were peeing in the bed, children were having crying spells, anxiety, teachers were always stressed, walking on pins and needles. It seemed to be all about the tests… These tests are attached to teacher evaluation, a school’s progress report, whether the school is deemed a failing school, and closed.

New York City has been an outlier in the movement, its test refusal rates at a meager 2.5 percent last year.  The climate has been chilly for dissent.  Bill de Blasio swept into office vowing to fight inequality, launching a universal preschool initiative that became a model for the nation.  But the mayor has stumbled in the labyrinthine politics of the city and state.  His education policies have been out of synch with his early progressive vision, veering close to those of his billionaire predecessor, Michael Bloomberg.

Carmen Fariña, chancellor of the nation’s largest school system, has served as executor. Until recently, when she softened her opposition to test refusal, amid talk of retirement, Fariña had been a staunch opponent of opting out, silencing critique  of the city’s policies.  Educators and administrators have been cowed, discouraged from speaking out about what many have come to regard as malpractice.

One elementary school teacher remained undaunted, defying the ban on discourse.  Under the name Ms. Rumphius—the eponymous, idealistic heroine of Barbara Cooney’s beloved children’s book—she took to venting at her blog, pedagogyofthereformed,  on a number of vexing topics, among them teacher evaluation based on high-stakes assessment, untimed testing, and other “stupid educational trends” that have sacrificed children’s well-being and love of learning on the altar of accountability.

Under the circumstances, communicating with parents has been difficult.  In 2015, the New York City Council passed a bipartisan resolution in support of informing families about the right to have their children boycott the tests.  Yet the department of education has not cooperated, continuing to thwart the democratic process.

On March 28, after the first day of the English Language Arts exam, Newsday, Long Island’s major media outlet, now owned by the founder of Cablevision, reported the results of its survey of 92 school districts. Nearly 68,000 students—50.7 percent of eligible students—in Nassau and Suffolk counties had opted out. State education officials, the article noted, declined to comment on the number of test refusals, which were in keeping with those of last year.

Elia’s prediction hangs in the air.  The data collection and crunching in the weeks to come will provide validation or expose her wishful thinking.

But the next generation of parents and educators has been emboldened by this exercise in democracy. In Greenlawn, New York, as Newsday’s John Hildebrand reported, Jessica Perry, a former elementary school teacher, was inspired to advocate on behalf of her son, Brayden.  Deeply disturbed by the defects of the testing regime, she wrote to her local school administrators to tell them that her son will never take the exams.  She had received a note from his school informing her that he needed to spend more time practicing how to fill in bubbles.

A five-year-old kindergartner, Brayden has three years to go before his first round of high-stakes tests.