Support for the arts has been steadily dwindling in the United States. Lots of competition out there for a slice of the multi-trillion-dollar American budget. And, besides, we’re too busy with more important stuff, aren’t we? 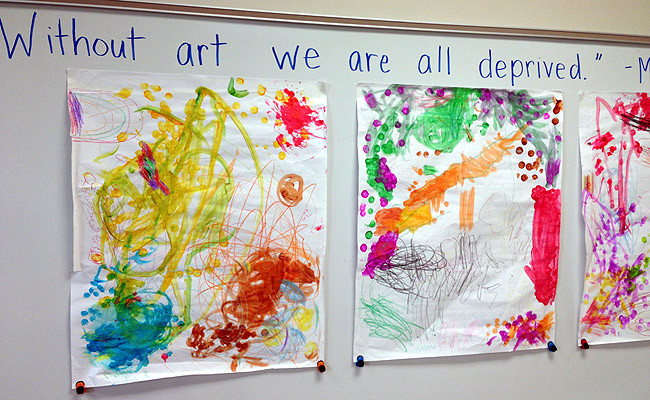 But other, more enlightened views have held sway. Fifty years ago last September, Lyndon B. Johnson, patriarch of the Great Society—including Head Start and the War on Poverty—signed the Arts and Humanities Act. The United States “cannot rest solely upon superior power, wealth, and technology,” the legislation noted, “but must be founded upon worldwide respect…for the nation’s high qualities as a leader in the realm of ideas and of the spirit.”

Like education, the National Endowment for the Arts, the guardian of this high-flown mission, is at the mercy of political and ideological turbulence. NEA’s budget of $146 million is meager relative to other advanced powers, who see fit to spend billions on food for the soul of civilization. Where art and education intersect, the storms have wreaked havoc.

In 2012, as American school children were racing to the top, the U.S. Department of Education released a nationwide survey of public elementary and secondary schools that documented the damage of NCLB to participation in the arts.  While music and visual arts instruction had not declined significantly, theater and dance, already at risk (available in only 20 percent of elementary schools) were vanishing, like play, in the precincts of early childhood, the percentages dipping below five percent.

The press release for the report noted the troubling “equity gap” between low- and high-poverty schools not only in access, but in the “richness of course offerings.”  The Department of Education declared its determination to tackle the problem by allowing more flexibility under NCLB, and designating the arts and humanities a priority in the Promise Neighborhood competition. “A well-rounded education is simply too vital to our students’ success to let the teaching of the arts and humanities erode,” said Arne Duncan.

Just as Duncan’s term was expiring, a movement was taking root. When I checked out No Art Left Behind on Twitter at the turn of the new year, I found these numbers: tweets (581); following (234); followers (207); and likes (91).

The seeds were planted by kindergarten teacher activist, Susan DuFresne,  and Anthony Cody, co-founder of the Network for Public Education, and host of the blog, Living in Dialogue, where the two introduced the concept:

In the past 13 years of No Child Left Behind and Race to the Top test-driven education policies, art has been pushed to the margins in our schools. Students have lost countless hours for creating art, music and dance that expresses themselves. But artistic expression is like the seedling that forces its way through cracks in the asphalt. This blog series will explore how students and teachers use art to express themselves.

One recent post by Michelle Strater Gunderson explored “poetry as subversive activity.” For this first-grade teacher and doctoral student in Chicago, teaching poetry is an “act of resistance,” a reclaiming of the profession in a time when many administrators insist that all lessons and unit plans be aligned to the Common Core, and teachers may be reprimanded for straying from the program.

The NEA had been taking note. In early December of last year, the agency released The Arts in Early Childhood: Social and Emotional Benefits of Arts Participation, the product of a task force designed to gather knowledge about the arts’ role in health and education across the lifespan.

We’re a data-driven culture, and exhaustiveness is required. This project was no exception. Still, NEA chair, Jane Chu,  sounded an apologetic note in the report’s preface. For this review and gap analysis, covering the years from 2000-2015,  she wrote, they’d had to make some tough choices, excluding physiological or neurocognitive outcomes.

Of course, like all good reviews, the latest NEA report ends with the twin caveats of gaps in the research literature and methodological challenges.  We can never get enough data, can we? Still building that Tower of Babel. But the findings, which revealed positive links between social skills and emotional regulation and the arts—music, dancing, drama, theater, visual arts—provide a tiny cache of ammunition for No Art Left Behind.

How serendipitous, if strategic. Yet a far cry from the NEA’s less tentative report in 2004, Imagine! Introducing Your Child to the Arts.  An update of an earlier publication from 1997, before NCLB was enacted, this one had a celebratory and reverent air. Not surprising, as the agency’s chair at the time was Dana Goia, a poet. In his preface, he speaks to readers:

As a parent, I want my children to lead complete and fulfilling lives. For many people, true fulfillment is linked with finding an early path toward excellence. It does not matter whether one’s early interest develops into an adult career. What matters is that every child finds a positive, meaningful activity that instills self-confidence and self-worth. For some children, excellence will come on the athletic fields. For others, it will come in the class spelling bee. But for many children, fulfillment will arrive on the stage, at the piano, or with a paint brush in hand.

Alas, the most recent NEA report omitted storytelling and the literary arts. Here’s a poem by one of Gunderson’s students. You can’t get more prosocial than Christopher:

Presidents of the USA airforce
Keep no danger
Keep goodness
Do not use guns, or stuff like that
Use words
Will might stop it