(AlterNet) More than two decades ago, Deborah Meier warned that the idea of democracy was in peril. “Is it ever otherwise?” she asked in the preface to The Power of Their Ideas, her elegantly argued manifesto for public education. A self-described preacher on its behalf, she has spent half a century nurturing “everyone’s inalienable capacity to be an inventor, dreamer, and theorist—to count in the larger scheme of things.” 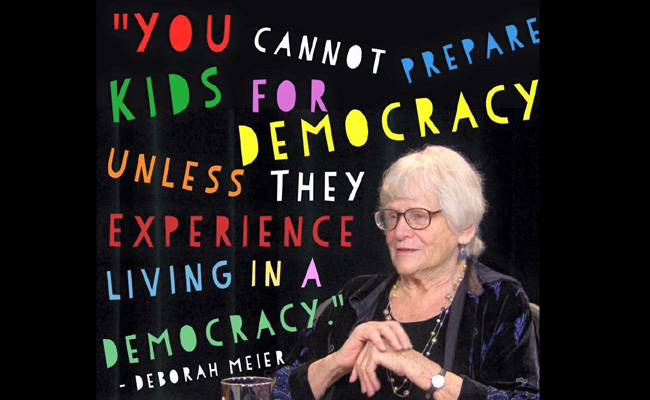 I met Meier in the mid-aughts, when I joined a grassroots campaign she spearheaded in New York City to restore creative play and hands-on learning to preschools and kindergartens. This éminence grise of progressive early childhood education and the small-schools movement (for which she received a MacArthur fellowship in 1987) had begun her career as a kindergarten teacher at the Shoesmith School in Kenwood, a diverse neighborhood wedged between the University of Chicago’s Hyde Park and an impoverished black community.

The verb “restore” implies absence. And such was the case, much to the chagrin of the early childhood educators, faculty from local colleges and universities, and public school teachers who had been meeting regularly, as Meier recounted in a post on her blog, “to share horror stories.” Drills, scripted teaching and standardized testing threatened our national genius for inventiveness. We had entered risky terrain, five-year-olds deemed failures before they reached kindergarten. We knew that flexibility, perseverance, empathy, curiosity, social awareness, and resilience are best developed in exploratory play, yet these qualities were now missing from the lives of growing numbers of our youngest citizens.

I was tasked with moving the work forward, seeking more funding and expanding to other cities efforts already begun by the Washington-based Alliance for Childhood. We called ourselves the New York Voices of Childhood, and we sought to bring our urgent message to educators, parents, policymakers, and others concerned about children’s well-being. Alas, our lofty mission fell on deaf ears.

These schools belong to you

After founding the Mission Hill School in Boston, Meier returned to a city vastly different from the one in which she made her mark in the late 20th century. Supported by Anthony Alvarado, a young superintendent in East Harlem’s District 4, she started Central Park East elementary school in 1974. “A bold experiment,” as she describes it in her new book written with Emily Gasoi, These Schools Belong to You and Me, “that would eventually result in over 30 small, autonomous schools of choice blossoming throughout one of the city’s most troubled and neglected communities.”

Michael Bloomberg, New York’s billionaire mayor, now had direct control of the nation’s largest school system, its student body primarily black, Latino and impoverished. His henchman, Joel Klein, an attorney with no education credentials or teaching experience, had assumed the role of chancellor in 2002, just as No Child Left Behind became law. Purveyors of disruptive innovation, a dubious business strategy, they hewed to an agenda of standards-based accountability in ascendance across the nation, seeking market-based solutions to educational inequity, while claiming the moral high ground of the civil rights movement. Their reign anticipated Betsy DeVos and the full-frontal attack on America’s public education system that has accelerated during Donald Trump’s presidency.

By 2006, as our play restoration initiative was getting off the ground, Eva Moskowitz stood ready to enter education’s executive suite. After a stint on New York’s city council, fresh from her loss in Manhattan’s election for borough president, she fielded two job offers. The first originated with Joel Greenblatt, a managing partner of the hedge fund Gotham Capital, and John Petry, who heads up Sessa Capital, and cofounded Democrats for Education Reform. They had plans to start a charter school in Harlem and wanted Moskowitz to run it. Klein, on the other hand, hoped to install her as the leader of a teacher training program, for which he had raised $20 million, under the auspices of the City University of New York.

Moskowitz was not interested in an alliance with public higher education where she would be a mere “figurehead in chief,” as she writes in The Education of Eva Moskowitz, her new memoir published earlier this fall. More appealing was the CEO position. “I’d have real control that would enable me to strive for true excellence,” she writes, covering her Machiavellian zeal with a characteristic veneer of righteousness. What most titillated Moskowitz was the potential for empire-building with the support of two of the city’s power brokers. She loved their vision: “figuring out how to run a school that cost no more than the district schools but got far better results, and then replicating that model over and over dozens of times. Cracking that nut could revolutionize American education.”

By 2014, Moskowitz was on her way to that goal, pushing students to excel on standardized tests, psyching them for peak performance with “Slam the Exam” rallies. Success Academy, which now included 41 schools, had become the city’s largest charter network. That number continues to climb, feeding her insatiable ambition; within a decade, she has said, she hopes to have 100 schools in the fold.

The Education of Eva Moskowitz is a torturous read. After 359 pages of copious detail, an internal structure that defies chronology, zig-zagging across Moskowitz’s life, the evisceration of journalists, politicians and “union flacks,” as she refers to people and organizations fighting for social justice, and anyone else who has crossed her, my mind was numb. Not to mention her hubris, greed, narcissism, humorlessness and lack of self-awareness. (This from the author of In Therapy We Trust: America’s Obsession with Self-Fulfillment.)

“His hypocrisy would have been comical if the fates of real children weren’t at stake,” Moskowitz writes of Mayor Bill de Blasio, her adversary in building an empire. Ah, yes, the children. “While it can be frustrating to teach them because they don’t know how to behave,” Moskowitz writes in a chapter called “Weevils” (an infestation she attributes to snacks from the Department of Education), “the upside is that they are virtually a blank slate…. if you take advantage of that fact to teach them to become good learners, that investment will pay dividends for years to come.”

Apparently, Moskowitz isn’t aware that the tabula rasa theory of the English empiricist John Locke has been discredited by decades of neurological and developmental science. As Berkeley psychologist Alison Gopnik writes in The Philosophical Baby, “Their minds seem drastically limited; they know so much less than we do. And yet long before they can read and write, they have extraordinary powers of imagination and creativity, and long before they go to school, they have remarkable learning abilities.”

Moskowitz and other charter network operators such as KIPP’s David Levin have cast their “No Excuses” schools in the mold of Harvard psychologist B.F. Skinner, whose radical behaviorism ignores internal processes—thoughts, feelings, and neurophysiological processes—emphasizing the relationship between observable stimuli and responses. Through a process called operant conditioning, behavior is modified by positive and negative reinforcement. (See Pavlov and his dogs.)

With harsh discipline, and incentives offered for good behavior and high scores on practice tests, Moskowitz remains convinced she can close the achievement gap between her students, the vast majority of whom are black or Latino living in poverty, and their more affluent, white peers. Her methods are abusive. Students’ every movement is monitored. Daydreaming is prohibited. Children are shamed, their lackluster performances on weekly spelling and math quizzes posted in a red zone on charts in the hallway.

Her strategies betray appalling ignorance of child development. From the moment of birth, children’s interactions with sensitive caregivers fuel their social, emotional and intellectual development, with enduring effects on their future capacities. The process of bonding, or attunement, is the first order of business. The choreography of this dance is nuanced, babies building basic trust, a sense of security and optimism that nurtures their desire to engage in the world and take on challenging tasks with persistence and pleasure. In development-speak, the phenomenon of applying nose to the grindstone is called “mastery motivation,” a process by which children acquire a sense of competence and control. Kids continue to hone these skills in play. Their insatiable curiosity and new knowledge form the foundation for the students, not to mention the human beings and citizens, they will become.

The case for nurturing citizens

In These Schools Belong to You and Me, Deborah Meier, now well into her eighth decade, looks back on this process of nurturing citizens. Her determination to level the playing field, literally and figuratively, emerged early on. She was a child of privilege, the daughter of a family with considerable social capital, New York City’s prominent intellectuals, artists, political leaders, and activists regular fixtures in their home. At the private Ethical Culture/Fieldston School, where Meier and her brother were students, educators cultivated the dispositions and skills required for competent and engaged citizenship, prepared to be the “leaders of democracy.”

All children, she argues, should have schools like this one, a belief that undergirded the work of the Coalition of Essential Schools, which she helped found with Theodore Sizer. Meier’s account of the small-schools movement, with its “clarity of hindsight,” is rich. “I felt as if we were riding an ascending wave,” she writes, noting with sympathy for her younger “self-imposed naïveté” how her schools in New York City and Boston served as models for Bill Gates’ early foray into education.

“It’s now clear that we progressive educators underestimated how thoroughly our message would be co-opted,” Meier writes, “our vision of equal education distorted by a rising tide of market-oriented reforms.” She also concedes inadequate concern about the “relative paucity of important black and Latino leaders” on their side as well as “the general support articulated by major civil rights organizations for test-based reforms.”

On this journey, Meier’s heart has remained in early childhood, fertile ground for her love affair with public education. From the windows of her Chicago row house, on the street overlooking Shoesmith, she spent time observing her own and “other children, mostly children of color, immersed in lively, often intricate and sophisticated play.” But in the field, the tableau was not pretty. Having completed her coursework at Chicago Teachers College, Meier spent three days a week in a number of all-black K-8 schools on the city’s poor, segregated South Side. She was shocked by their nearly uniform oppressiveness. “Everyone was focused on control,” Meier writes, “as if in anticipation of an imminent ‘prison riot.’”

Protests to the contrary, Eva Moskowitz is still stuck in this dystopia. While Success Academy’s website proclaims customer service as critical to the business operations team, and hospitality a key part of the culture, the organization routinely suspends as many as 20 percent of students at least once during an academic year. The family of an 8-year-old boy at the Prospect Heights charter school in Brooklyn, who has been suspended for lengthy periods of time—as much as 45 days—since his enrollment in 2016, has brought a lawsuit. Success officials have deemed him a danger to himself and those around him. As Moskowitz told Rebecca Mead of the New Yorker, “We have young children who threaten to kill other people.”

But a new order is emerging, thwarting the ambitions of this thin-skinned CEO and America’s secretary of education. Community, youth and parent-led organizations, members of the Journey for Justice Alliance, are asserting the power of their ideas in town halls across the country—more than 30 thus far—creating a new vision for public education. Exploding the illusion of school choice and rejecting school privatization, this diverse coalition is taking back the night of our democracy and the souls of all our children.