Not long before New York City’s public schools closed for winter break, Katie Lapham posted to Twitter a drab black-and-white photograph of a testing manual she had found in her mailbox, the imprimatur of Carmen Fariña in the upper left-hand corner. An elementary school teacher and long-time critic of education policy, Lapham  felt sick.  “We will continue to refuse the tests,” she wrote, with the hashtag #OptOut2018. 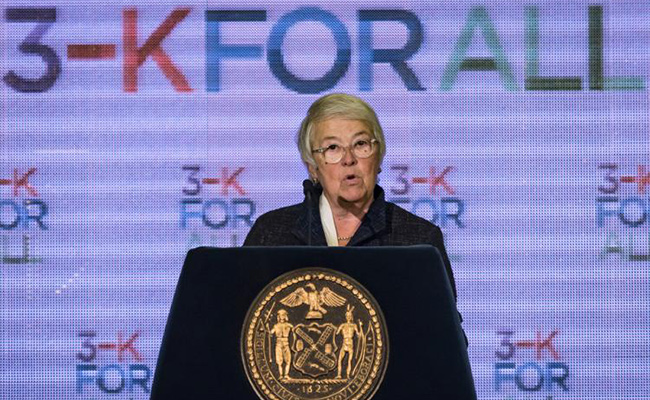 Within days of the delivery, Fariña confirmed that she was stepping down from her perch as chancellor—four years after Bill de Blasio had coaxed her out of retirement to run the nation’s largest school system. Her appointment had elicited guarded optimism among the city’s educators.  They took comfort in her half-century of service, including a longtime stint as a teacher in Brooklyn and principal of a well-regarded elementary school in Manhattan. But Fariña’s more recent work was suspect.

As deputy chancellor under Joel Klein, her predecessor in the administration of billionaire Michael Bloomberg, Fariña was tasked with carrying out a policy agenda that many found problematic, if not repugnant.  She was a good soldier in a regime driven by standards-based accountability, market forces, and wealthy financiers—from which, despite de Blasio’s best intentions, he has failed to fully extricate himself.

At the  press conference convened to announce the news of her retirement, Fariña noted that she had not taken the job to win a popularity contest.  She said she was “most proud of bringing dignity to teaching, joy to learning, and trust to the system.” De Blasio called her departure “bittersweet,” announcing a national search, already underway out of public view, for her replacement.

After a lifetime of service, nearing 75, Fariña is entitled to put the finishing touches on her narrative. But the cognitive dissonance could not be more acute.

She has left teachers and parents with an acrid taste, her leadership a study in alienation, mistrust, and a careless disregard for democratic governance. A battle with the parents of Central Park East I, an elementary school known for child-centered, play-based learning, became a flashpoint of her tenure as she continued to support an incompetent and abusive principal, out of sync with progressive ideals.

Fariña’s response to the city’s entrenched segregation—highlighted by a damning report issued by U.C.L.A.’s Civil Rights Project in 2014—reflected astonishing tone deafness.  Let the children get pen pals, she urged; her solution to a deep wound and massive systemic failure seemed heartless and woefully inadequate.

The chancellor brooked no dissent. While Fariña softened her opposition to test refusal amid early talk of retirement, she was a staunch opponent of opting out, silencing critique of the city’s policies, and directing her deputies and administrators to follow suit with parents and teachers.   In 2015, the New York City Council passed a bipartisan resolution in support of informing families about the right to have their children boycott the tests.  Yet, as the season of the high-stakes Common Core exams began last year, the department of education had not cooperated, parents left in the dark.

De Blasio shared custody with Fariña of universal preschool, his signature education initiative.  I welcomed the mayor’s bold venture, which began with a historic number of four-year-olds—more than 50,000—in the fall of 2014. Designed to address New York’s deep income inequality, “PreK for All” represented an attempt to level the playing field. Last fall, a limited number of three-year-olds joined their older peers.  A “game-changer,” he had called the expansion, conceding the challenges that lay ahead.

The mayor, however, neglected to mention the risk to child well-being of toxic education policies. During his first term, the Common Core standards cast a dark shadow over our youngest children, condemning them to a treadmill of benchmarks and assessment before they can even lace up their running shoes. Their human right to a rich, joyful educational experience has been violated, rote learning, worksheets, and scarce time for play foisted upon little ones whose social-emotional and fine motor skills are in formation.

I posted the news of Fariña’s retirement to my Facebook page on the day of the winter solstice. Within minutes, a group of early childhood educators had gathered, offering their appraisal of the chancellor’s tenure and venting long-held grievances. The thread quickly grew longer.

The term child abuse appeared.  A growing number of early educators across the country are anxious about the harm they’re inflicting on young children, the legacy of misguided education policies in place since the early aughts.  Malpractice, they call it, and many are leaving, beaten down by the stress.

The vast wage gap between public school teachers and those in community-based organizations also cropped up. Most of the city’s three- and four-year-olds are enrolled in settings outside the public schools. Like the children in their care, these practitioners often live in difficult circumstances, while moonlighting to make ends meet on their subpar salaries.  Such is the case nationally, the subject of a recent New York Times Magazine piece by Jeneen Interlandi.   But the problem is especially urgent in New York, threatening the sustainability and success of de Blasio’s program.

I truly hope they get someone who will respect children, teachers, families, and child development principles, and who knows and respects that children need play and outdoor time and FUN!—Ellen  Jaffe Cogan

The department of education requires two hours and ten minutes of play-based learning and one hour of gross motor [skill-building] in preKs.  Unfortunately, many preKs—both school- and community-based—believe they must get children ready for kindergarten.  If kindergarten was developmentally appropriate, there would not be pressure to do more rote-like teaching—Lisa North

Since Bloomberg, kindergarten has not been an early childhood grade.  That has helped to turn kindergarten into first grade.  Disgraceful!— Renée Dinnerstein

The teachers are not supported by administrators.  They are trained to be developmentally appropriate…but are told by their administrators to follow a canned curriculum that does not individualize.  There is very little time for open-ended, spontaneous play—Dana Doyle

Those who are not on the ground don’t really understand the current situation and the gross inequities—from salaries to lack of nurses and security—between community- and school-based preKs.  What they  fail to realize is 3K for All and PreK for All are completely dependent on the community-based workforce, the physical spaces we have, and the expertise we all bring—Chloe Pashman

Who will, indeed, restore joy to learning,  dignity to teachers, and trust to the system?

Most of the people whose names have been floated in this closely guarded process would do great harm, perpetuating the toxic policies that have dominated public education. Missing are Michael Hynes, the superintendent of the Patchogue-Medford school district on Long Island, and Jamaal A. Bowman, founder and principal of the Cornerstone Academy for Social Action middle school in the Bronx.  Each of them makes a powerful case for bringing joy and excitement back to learning, and they live and work by their words.

During Hynes’s four years in his large, diverse district, he has doubled recess time in kindergarten through fifth grade, brought yoga and meditation to all students, and  reintroduced play and project-based learning into kindergarten through second-grade classrooms, from which they have been rapidly disappearing. He understands that children cannot be deconstructed, that their physical, emotional, academic, and social selves are inextricably linked.

Bowman caught my eye in 2015, when he wrote an op-ed for the Daily News, a paean to the whole child.   A former teacher and the father of a preschooler, he understands the richness that all students bring to the process of teaching and learning, and the urgency of getting it right.  As he wrote in a piece I published at my blog a year ago:

There is unlimited talent and potential within our schools.  Children come to us full of excitement and infinite ideas. They believe and know that anything is possible. They are fearless, and not tainted by age, time, or the ridicule of failure. They are natural leaders; and when they find a passion, they’ll work vigorously to achieve mastery without provocation.

For New York’s next chancellor, we need a radical change of direction. The stakes have never been so high.