I recently learned that Harriet Cuffaro had left us. Suddenly, I was back on the classroom floor at Bank Street College of Education, where she taught for three decades.  Well past childhood, we were deep into block building, one of the most rigorous assignments I encountered in graduate school. 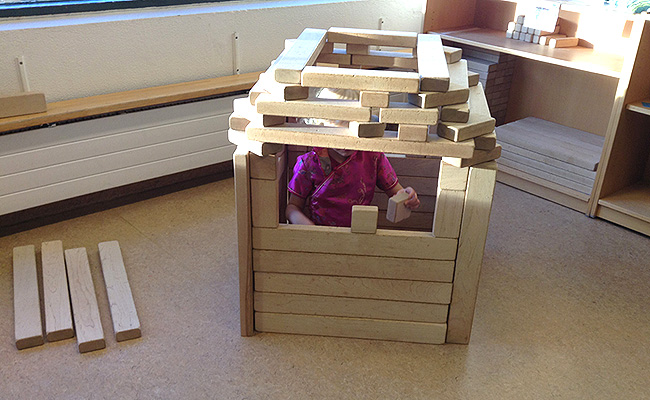 Cuffaro, a renowned progressive educator in the mode of John Dewey, championed open-ended play and experiential learning. In the introduction to Bank Street’s Occasional Paper Series No. 32, or “Festschrift—a volume reflecting the values, theories, and passions of a senior scholar in a field”—Miriam Raider-Roth, a former student, calls up the vivid image of Harriet’s office, a welcoming space:

The centerpiece was a glass case whose wooden frame rested on the floor and met the hanging bookshelves halfway up the wall. On each shelf, Harriet had carefully placed sets of blocks that she had acquired through her own travels and as gifts from colleagues and former students. Each set had a story and a history, color and texture, purpose and possibility. On any given day, with a simultaneous playful and serious gaze, Harriet would tell me about a particular set, inviting me to touch, hold, and play with the blocks. In those moments, Harriet’s philosophy of teaching rested in my hands.

I never had the pleasure of communing with Cuffaro.  But she’s been my Beatrice, Dante’s guide out of purgatory into paradise in The Divine Comedy.  I’ve thought of her often during these dark days of education reform as blocks have been disappearing from kindergarten and first-grade classrooms.

Cuffaro’s ascendant in the zeitgeist.  Within days after hearing of her death, I stumbled upon “Buildings, Blocks, and Experience,” an essay by Jonathan Lash.  Five years into his term as the president of Hampshire College, he was paying homage to his wife Ellie, a veteran teacher—mostly of first-graders—at the Sidwell Friends School, in Washington, D.C.  “She has been a wise and patient adviser,” Lash writes, “as delighted as I am by this college, founded…to be an alternative to the lecture-test-grade model.”

Hampshire’s bona fides as an alternative institution are well established. This is hardly news. But how refreshing to hear a college administrator speak so openly, and respectfully, of the cues he had taken  from an early childhood educator.  I’m reminded of another first-grade teacher, whom I met at Cutchogue Elementary School, on Long Island’s North Fork.  “I feel like my wisdom is not honored anymore,” she told me with tears in her eyes. She was struggling to fit dramatic play into a day bound by the “learning blocks” of a curriculum driven by New York’s Common Core standards.

As our kids are on the treadmill from cradle to college to career, Hampshire’s president makes the connections across the educational spectrum.   Learning by doing is the strategy; innovation and invention are the outcomes.  Lash has a model, right on his college campus, a new building “designed to meet the most advanced, sustainable, green-building standard in the world.” He notes that it’s already become a teaching tool, professors integrating the science, math, and technology behind its operation into curriculum.  All of which evokes the block corner and experiential learning in Ellie’s first-grade classroom at Sidwell Friends:

Watching all this unfold at the college, Ellie mentioned the work her first-graders commonly did after a visit to the National Zoo, constructing a model of it. As they worked, they explored what a zoo should be. They had many questions and a few spirited debates as they counted out different-sized blocks from the shelves. How big should the enclosures be? Should there be pools? Places for the animals to sleep?

Self-motivated, they looked up information about animals, to learn their behavior and habitats. The animals need grass and trees and water, so the children cut green fabric into geometric shapes to make outdoor spaces. A student realized that twigs stuck into plasticine would make convincing trees.

Lash conveys the critical role of the teacher, who extends the children’s thinking, inspiring them to seek solutions to problems:

In teacher-led discussions, they asked questions like “Why do we have zoos?” and “How long have we had zoos?” They wrote and drew about the project in their journals. The model would remain in the classroom for the week, with children returning to improve it. They proudly gave tours to classroom visitors, explaining their design and how each part functions.

They were immersed in active learning, by experimenting, experiencing and thinking critically. They worked collaboratively with imagination and ingenuity. They were learning science, math, language arts, writing, reading, technology, even social studies and history. And they couldn’t have been more excited to dive into the project to solve their own problems and devise solutions, with teachers as advisers.

Like blocks, the kind of learning that sparks the imagination is becoming more of a rarity in the nation’s public schools.  Progressive education has become a province of the elite. The daughters of presidents—including Chelsea Clinton, and Malia and Sasha Obama—have thrived in the nutritious, dynamic classrooms of Sidwell Friends.

For the children of the Common Core, especially those of color and living in poverty, such experiences are, too often, off-limits.  It’s time to build a new, and more equitable, educational infrastructure.